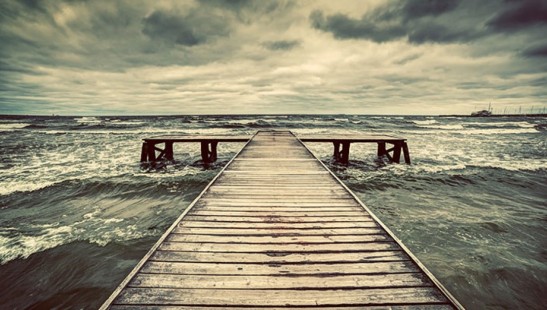 We’ve all had days, weeks or even longer seasons in which everything seems to go wrong. In the chaos of such times we invoke Murphy’s Law, or cultural superstitions related to numbers (like bad things always happening in threes), or we just plough through. We also know that sometimes bad luck, or suffering isn’t merely for a season but is the result of some systemic evil or structural brokenness. Poverty, racial inequality, lack of education, the absence of good health care, or the vacuum of positive parenting in our first five years are all examples. When things go bad, or seem to always be stuck, we naturally wonder where God has gotten to.

The Bible is more of a library than a book. It’s a collection of testimonies and stories of faith wrapped around two essential stories: the Exodus and God becoming human in Jesus of Nazareth. These begin with the story of creation, which portrays creation less as a fait accompli and more as an ongoing process in which we are called to participate as people made in the image of God. Creation is more of an ordering of chaos than a creation of something from nothing (ex nihilo). God shapes the universe from the chaotic, stormy waters in the darkness (as told in Genesis 1) giving them shape, light, order and pulling life from them. Creation, God’s ongoing work and our vocation, is an ordering of the chaos so that life can be and become. And yet all too often it seems like life is moving towards chaos. In fact that’s the mathematical hypothesis of chaos theory: seemingly random events can result from normal equations because of the complexity of the systems involved.

Today’s scriptures articulate the unavoidable tension in life. Job has lost everything. He rues the day he was born. He’s experiences life as the reversal of creation: chaos, destruction, death from which he cannot escape. His friend Eliphaz attempts to comfort him by telling him that God surely has a plan. God has never let the righteous fall or suffer. Job seems to hear this as a hallmark-y sort of idiom that too quickly overlooks pain and suffering to move to hope and resolution. In the gospel reading the disciples are terrified, in a sinking boat surrounded by a violent storm, recalling the chaotic forces of creation that God orders to bring life. It’s game over. Who can save them from such evil? They know Jesus, yet are surprised by his authoritative power. Who can bring peace to impending destruction? While we’re not fishermen, their story isn’t that different than our own.

1. The reaction of Job to the nightmare he’s living is normal. Yet Jesus’ reaction in the story is hard to understand. Jesus doesn’t seem that bothered about the storm racing on the sea, but he’s really surprised by the terror panic of his friends. How come they don’t see that They’re totally safe with him around. The sea is the symbol of the chaos from which God creates the world, the disorder to which the world so often resorts. How do you react to the little chaos that come into your life? Do you panic like the disciples, put up your defenses, resign yourself to the inevitable, or put all of your trust in the lord?

2. Look back over the past few weeks to a time and a place, where the storm was raging about you. Recall that moment, your reactions, your feelings. [listen here if you prefer that to reading] … Now imagine yourself in that situation which threatened you, then read the story again. Jesus is there with you this time. Tell him “Lord save me! I’m going down!” Listen to what he says, look for what he does.

This entry was posted on July 20, 2016 by Monte McClain in Blogging Towards Sunday.