Blogging Towards the Third Sunday of Advent, December 15, 2019 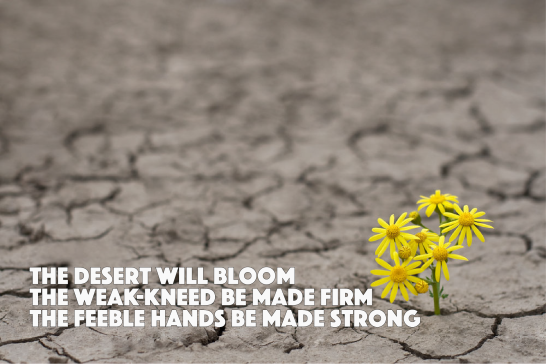 In his day of national defeat by Babylon and exile to a foreign land, Isaiah faced the soul-crushing fear of having his worldview, his faith, the way he understood everything crash to the ground. How could he (and his people) handle such change? Either he could choose complicity and despair. Or he could choose a blind belief in his self-sufficiency and personal power. Yet between the denial of change and the refusal to embrace it, God was calling to a middle way, a new way. It took serious the consequences of the sins of the people, which created systemic injustice, evil and failure. It also took serious the reality a person who thinks that they alone possess the truth, or have the power to change things how they want was a foolish idolater, trusting in themselves more than in God.

When all seems lost God will make the impossible not just possible, but reality. The desert will bloom. The blind will see. The deaf will hear. The lame will dance. All because of the word of God. Spoken at creation. Which created a passage in the sea when whispered over the narrow place of Egypt. A word that opened Esther’s eyes to the time in which she was called to take a stand for the people of God. It was never what was anticipated and it was always infinitely more than could ever have been expected.

Mary sings as she encounters her too-old-to-be-pregnant cousin, who is also with child. It’s a prayer echoing that of the barren Hannah when she miraculously has a child. Mary sings of the transformation of the world by God’s word. She glimpses her connection with Elizabeth, Hannah, all those who have come before and will come in the glory of what God has created and will redeem to fruition. Whom else can she praise? God alone has the words of life.

In Matthew we see John the Baptizer (the son of Mary’s cousin Elizabeth) doubting that Jesus is indeed the one to bring God’s saving grace. John anticipated a mass movement of repentance, a re-organizing of things in the recognition of people’s need for God. He never expected that Jesus would speak of God’s need for all people, who can only grasp that community if they let go, if they renounce, if they repent of the ways in which they see the world, each other, themselves and God. Jesus quotes Isaiah 35, to explain what is unexplainable.

Today we’re also faced with fear of great change. Has God forsaken us? Who can save us? We too are trapped on the existential spectrum between despair and self-sufficiency. Yet God is inviting us to share in the blooming of the desert, and the dancing of the lame.

• What word, phrase or image grabs your attention?
• How do you feel stuck, like dry land languishing in a seemingly endless drought? How is our world stuck?
• How or where do you see God’s newness already breaking into our world?

Download the study sheet PDF we’ll use in our discussion at @CAPCOakland HERE.

One comment on “Blogging Towards the Third Sunday of Advent, December 15, 2019”

This entry was posted on December 13, 2019 by Monte McClain in Blogging Towards Sunday.