There are 150 Psalms (poetic hymns) in the book we call the Psalms. Today’s reading – Psalm 30 – is a good example of a thanksgiving song, which tells the story of going into trouble and coming out of that trouble. While the trouble from which the speaker has been delivered is not concretely described or defined, it is something we can identify with. The poet speaks of an experience that has given her a new lease on life: a reorientation of life. Following a time of lament and loss, which ended in a God-given deliverance, the poet cannot not talk about it, singing, reciting over and over God’s good news, sharing it with the larger community.

Mark is one of the four gospels, most likely the first written down, which tell the story of Jesus of Nazareth. Written by a follower of Jesus it’s composed more like a catechism, an invitation to faith, than as an “objective” historical account. It repeatedly lifts up the good news (gospel) that the forces of death that seek to destroy human life are overcome by the resurrection life of Jesus through God – a life we too can know through faith.

Today’s passage from Mark is punctuated by the use of the term “daughter.” A father cannot be silent, coming to Jesus to ask for his help in healing his ill daughter. Along the way, Jesus is interrupted by a nameless woman whose anonymity is the result of her intense rejection by her family, society, herself and maybe she fears even God. She comes and wants to go in silence. But Jesus won’t let her, insisting on making space for her by naming her “daughter”: as a whole and healed person created in God’s image, a holy part of the people of God. 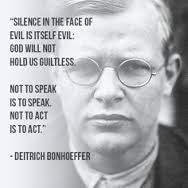 We hear a lot these days about speaking up and acting out. A notion that silence in the face of evil is complicity, often attributed to German Pastor Dietrich Bonhoeffer who died seeking to speak out against the evils done by Hitler and the Nazi Regime. While this confrontation of evil inhabits the testimonies of the Bible including today’s texts, there also is a confrontation of the choice to remain silent in the wake of knowing of God’s goodness.

• What word, phrase or image grabs your attention in the texts?

• How do you struggle with the silence of God that may merely be between the period and the but?; or much longer?

Download the text study sheet we’ll use at @CAPCOakland for our class discussion HERE.

This entry was posted on August 15, 2019 by Monte McClain in Blogging Towards Sunday.