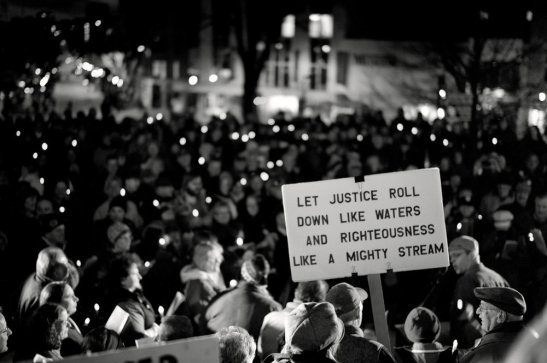 This week we move from narrative stores of call to written prophetic texts. While Amos wasn’t the first prophet, think of Elijah who we read of last week, he was the first whose words were written down. He lived, was called and served as prophet during the 8th century BCE in the Northern Kingdom of Israel. It was a time in which Israel was being made great again by its king Jeroboam II, following an earlier defeat at the hands of the Assyrians. Prosperity increased and the economic engines roared anew in a (short-lived) time of security, stability and peace.

We’re most familiar with the words of Amos in North America because of the prophetic example of the Rev. Dr. Martin Luther King Jr., who often used quotes and metaphors from Amos in his speeches, in particular today’s portion 5:24 about justice and righteousness flowing like raging waters. [it’s at minute 10:30 in the video of the speech above] Dr. King appropriated and contextualized the Word of God given to Amos for his time, calling not just for equality and justice, but for righteous living among all peoples. The dream he portrayed was one in which we would all recognize each other in the fullness of their identity as the combined interdependent created image of God.

Amos, while not that different, was particular in his context, pronouncing God’s judgement and eventual punishment of Israel for its sin. This was primarily from an inauthentic practice of faith, in which they invoked and talked of God’s covenant of peace and justice while at the same time doing such things as selling their neighbors into slavery if they couldn’t pay their debts, having a father and son share a girl forced into prostitution, and oppress the poor without recognition of God’s call to respect, equality and fraternity (see Amos 2:6-8 & Exodus 22:25-27).

Amos challenges his people to practice what they preach (or read in worship); to not just observe the letter of the law but also the spirit, to realize that God wants to be God of all of who we are. Some might interpret Amos as judging Israel primarily for their idolatry, but more than worshiping a foreign god, their sin was worshipping themselves without any sort of intersectional thought or mindfulness of their neighbors.

A biblical scholar wrote “Anyone who claims to like the book of Amos hasn’t understood it.” How then do we understand this prophetic word for us today in 21st century America?

This entry was posted on November 9, 2017 by Monte McClain in Blogging Towards Sunday.