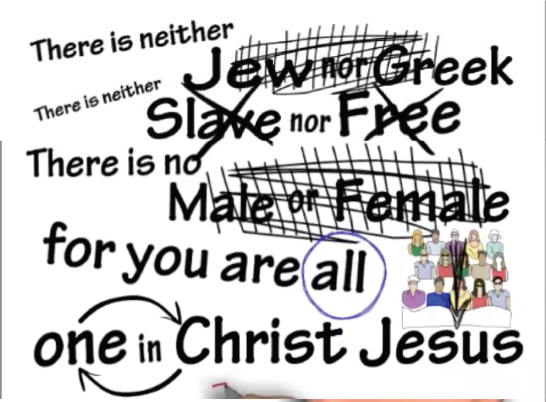 “At several times in history this [pastoral] letter, listened to by small groups of Christians, has shifted the direction of the age just enough to make the difference between a surge of new life and a drifting into decline.” It radically transformed the direction in which the Church developed in its infancy (as we read last week in Acts 15). It also was paramount in shifting the perspective of both Martin Luther and John Calvin, setting loose the revolution we now call the Reformation. What might it be unleashing among us in our world and culture today in which how we are defined and what is considered our usefulness or power is defined by what we purchase, how much we can produce, or who our people are?

The letter was written by Paul to the church community in Galatia (what we now call Turkey). There a debate and division had occurred among the Jesus followers over identity: did one have to first identify as a Jew by adopting Jewish rituals (such as circumcision and law obedience) before identifying as a Christian?; or could a Gentile-born Jesus follower simply become Christian? The underlying issue is of freedom, identity, unity and how the Church would live out the teachings of Jesus in a pluralistic world. The letter has served as the genesis of many revolutions of thought and continues to speak to us today. Paul argues for a unity based not on class, tribe or gender, but on family appurtenance. Underneath his affirmation seems to lie the proclamation of Jesus that “whoever does the will of God is my brother and sister and mother.”

In rabbinical dialogue the scriptural authority went to the argument, or citation, which came from the earliest part of the Torah. Here Paul goes back to Genesis 15:1-21 in which God makes the covenant with Abraham because of the latter’s faith, not his circumcision (which is only recounted later in Genesis 17:1-27 in which his circumcision is recounted in verse 23). Hence Genesis 15 trumps chapter 17. Going back even farther Paul refers to the Call of Abraham in Genesis 12 in which God promises to use him and Sarai as an avenue for blessing “all the families of the earth.”

This entry was posted on May 24, 2017 by Monte McClain in Blogging Towards Sunday.