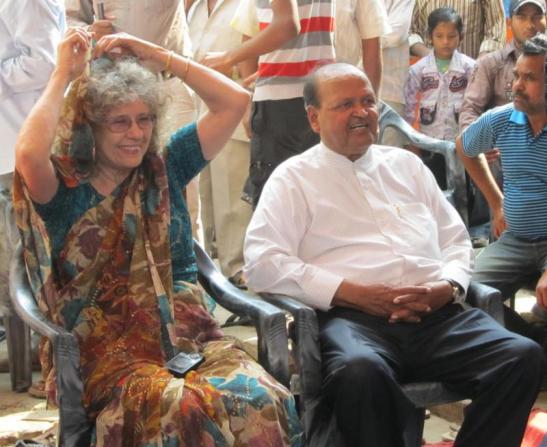 The following text is taken from the most recent newsletter of Witnessing Ministries, issued in memory of Philip Prasad. (Pictured above with his wife Elizabeth in 2011).

Philip traveled to India more often than I did due to my work in the office of Witnessing Ministries in Fresno as being supportive of him while he was in India. In this way we divided our time to accomplish more and save resources. However, from 2010 to the time of his pneumonia in March 2014, I was more often by his side in the field. He made my time in India smooth and meaningful. I always treasured the experiences that I had with him there. Subjects in conversation and action would arise in the field in India that one might not think of at home surrounded by an American culture. I also became more acquainted with those in leadership and their abilities. In the photo above we traveled to the home of his grandmothers, mother, and other relatives who lived in the enclave of Kot Mohalla in the town of Kasganj. I had been there many times on previous trips and it was impressive to return to the beginnings of his family as I knew it.

Philip was always trying to make life better for people because he could detect their problems. Developing a community was his natural talent. We note though, that everything he did was rooted deeply in his Christian faith and the belief that faith was a game-changer in people’s lives. He paid attention to this mohalla and followed their ability to retain their Christian faith and hold regular worship services.

For this community, he put in a new submersible pump so they could have fresh, clean water and, also, piped it to many of the homes in the enclave so they would have running water in their homes for the first time. He built a much better place for them to have worship services and made sure that children from their community could apply for our education scholarships. Children from Kot Mohalla have done quite well in their education endeavors.

The well is located where people have easy access to it and there is a plaque sealed into the rock by it with the scripture in John 4:14, “but whoever drinks the water I give him will never thirst. Indeed, the water I give him will become in him a spring of water welling up to eternal life.” The scripture is prominently displayed for people who thirst to read and by which to be comforted. For many, the congestion of the cramped community and seeing animals live in very tight quarters with people would be enough to overwhelm one’s mind, but Philip could see beyond the obvious poverty and their difficulties to what he could do that would bring significant relief to their situation as well as commitment to their Christian faith.

Charting a new course for people through a foundation of Christian faith, Philip was always looking to the future and helping them understand that there is a way to move forward in the worst of circumstances if one has the faith and courage to change one’s self.

You can access the full digital edition of the newsletter online by following THIS NEWSLETTER LINK.

This entry was posted on July 1, 2016 by Monte McClain in Missional Living, Uncategorized.