This week we continue our series based upon your questions and suggestions.  We’re wrestling with a question, asked by Gary Yee:  “Besides from the womb and the belief of Adam and Eve, where do people come from?”  Underneath this intriguing question is the larger one of the relationship between faith and science and how we practice both in the 21st century scientific worldview that dominates our culture.

We’re studying the question from the viewpoint of Genesis 1 and 2, which contain not one, but two creation stories. Did you know that there are two? How can all of us have come from 2 people? What about scientific discoveries and theories like the Big Bang, Multiple Universes, Evolution and even the possibility that we come from other planets, brought here by aliens?

On the first level we have to engage the deeper question, which is the elephant in the room.  Can we trust science to tell the truth through observation and theories?  Can we trust the faith stories that have been handed down to us for thousands of years?  Can we adhere to both viewpoints and still be faithful and coherent?

THEOLOGICAL CONSIDERATIONS: the how and why of life:

What’s the story of creation even about in Genesis?  Is it more like a newspaper factual reporting of what happened, or is it more like a poem or essay that wrestles with what life is about and for?  Our reformed theological perspective, and what I believe, assert that the Bible is more about the why of life, then the how of natural observation.   In his theology book, Daniel Migliore  talks about the meaning of the doctrine or belief in creation.  In his words the belief that God created us points to the life affirmations that: 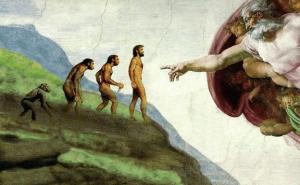 This entry was posted on July 12, 2013 by Monte McClain in Uncategorized and tagged Blogging Towards Sunday.